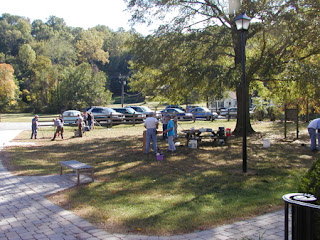 The excavation teams spread across the front yard of the Courthouse. 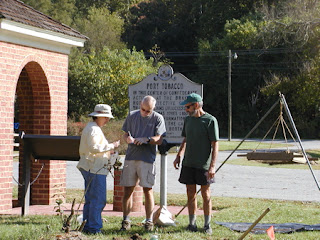 Filling out paperwork by the well. 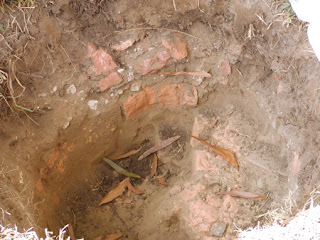 A shovel test pit encountered brick and mortar that appeared to be in place. 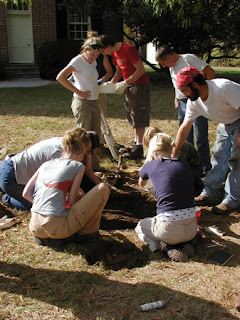 Peter instructs some volunteers on how to excavate a unit. 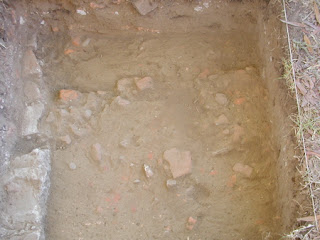 The excavation unit excavated to explore the brick and rubble filled STP.

Remember when I said we laid out 60 STPs for the weekend?
Well in the last two days our volunteer crew has excavated about 100 STPs and we still have all day Sunday to work! There were over 30 volunteers today alone. We couldn't have asked for a better group of enthusiastic and energetic people. Special thanks to Charlie Hall, Maryland Terrestrial Archaeologist, who help survise and instruct the participants.

Update: An unofficial Yahoo! Group has been set up for all Maryland CAT participants to encourage communication.
If you are a CAT member, please sign up here. Or you can send an email to subscribe-mdcat@groups.yahoo.com . Membership is restricted to protect folks from spam. Your membership should be approved within 24 hours.

Anyone interested in Maryland Archaeology is encouraged to join the discussion group. You do not need to be a CAT member to join or participate.
Posted by April M. Beisaw at 10:04 PM 2 comments: 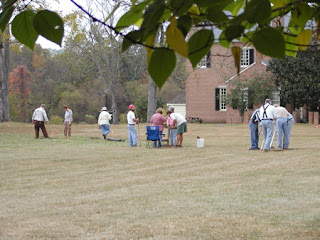 Many of the day's volunteers were ready to work by 9am. 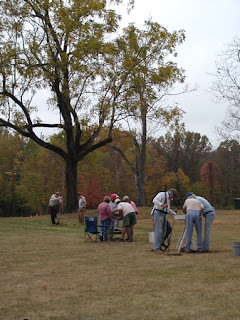 The STPs in the transect just south of the church foundation encountered a variety of deposits, including building foundations, cellars, and a deep sand and gravel bed that may be an old stream bed. 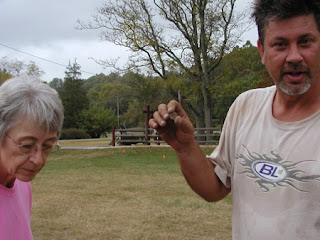 Scott shows off an historic shotgun shell fragment just as a hunter is shooting off a rifle in the woods nearby. 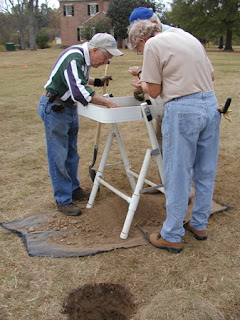 Some of our Certified Archaeological Technican volunteers, hard at work. 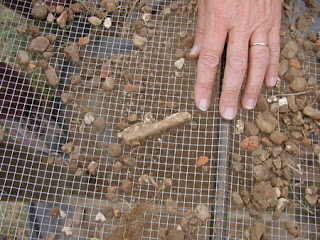 A tobacco pipe stem that is covered in mortar. Pipes have been found in building mortar at other sites in the region. Reduce, reuse, recycle. 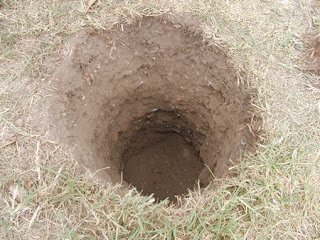 One of the deep STPs that is likely inside a cellar hole. 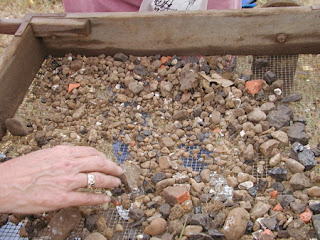 A screen full of coal and building debris. 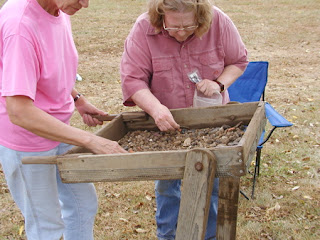 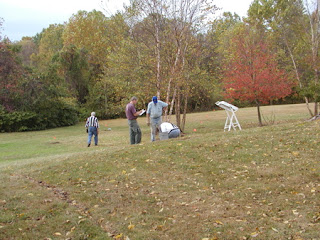 Sometimes two Ph.D.'s are better than one. 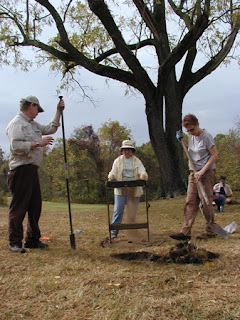 Sometimes a digging bar is needed to loosen up the soil. 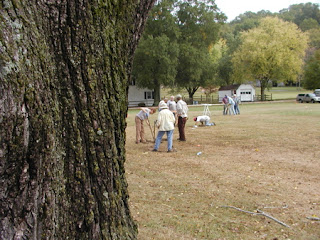 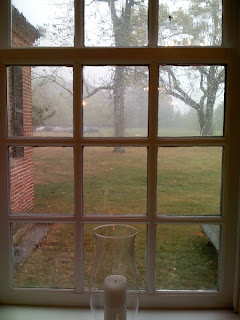 One heavy rain strorm forced us into the courthouse for an hour.

The team spent the day preparing for the volunteer weekend at Port Tobacco.

We laid in several shovel test pit transects to sample the Wade House, Centennial Hotel, and jailhouse properties, and the western portion of the village green (in front of the courthouse). Those 60 stps should keep us busy for awhile. We also brought out most of the ceramics from the previous courthouse and St. Charles hotel excavations. These artifacts have been stored in the courthouse since its reconstruction and are in need of basic sorting and identifcation; the perfect makings of a workshop on historic ceramics.

The preparations continue well after the end of the field day. This evening we are busy preparing site forms and other paperwork and loading extra supplies into the truck.

The forecast is calling for some rain on Friday, but the volunteer weekend will go on rain or shine. There is plenty of work to be done inside the courthouse. And honestly, when was the last time we had an all-day rain storm in southern Maryland? ...although I may have just jinxed us!

The Poll Results are In

We asked what you wanted to see more of on the blog and here is the winner:

So I am going to pack my fancy camera equipment for my trip down to Maryland today. This camera differs from the one I usually take to the field in that it has a macro function that takes excellent photos of small objects. Our new goal is to blog about an artifact twice a week.

A new poll will be posted today. Please take the time to check it out and vote!

Gearing Up for More Fieldwork

I have been in Binghamton for the last two weeks to work on some library research and grant writing for Port Tobacco. Fall is in full swing up here and I am ready to head back south.

This weekend is our Archeological Society of Maryland Volunteer Weekend. We hope to have a great turnout with a small army of volunteers ready to help with everything from field survey to artifact processing. No experience is necessary. Our staff will provide training, supervision, and even some entertainment.

For anyone enrolled in the Certified Archaeological Technician Program, we will be providing two workshops!

In an earlier post, I promised that we would look at several aspects of the site over the weekend to provide variety to anyone who wants to come out each of the three days. I've already named two areas: 1) the Wade House and Centennial Hotel, and 2) the field producing a mixture of prehistoric and historic material. The third area of interest will be the front lawn of the reconstructed courthouse, provided we can get the utilities marked out before we put a shovel in the ground. Safety first!

So, everyone reading this is invited to Port Tobacco, Charles County, Maryland, this weekend. Come to work or come to watch. No RSVP is necessary but feel free to drop us a note so we can get an idea of how many people to expect. It should be a beautiful weekend with highs in the 70s.

A Different Type of Ceramic 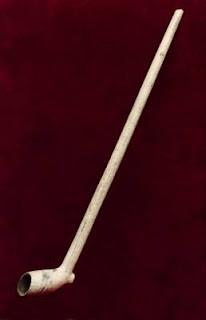 Every week I have been introducing a different type of ceramic pottery, today though I am going to talk about another kind of ceramic…the tobacco pipe! Tobacco pipes have been found all over the United States in archaeological excavations and Port Tobacco is no different. The question is where did they come from and how old are they? Are they datable?

The majority of the pipes came from England and went through a variety of changes from the 17th century up through the 19th century. The styles of the pipes were different depending on who made them. The pipes were cheap and were disposed of often. Shapes and sizes of these clay tobacco pipes changed from short stemmed with large bore holes to longer stem with smaller bore holes. The holes are made when firing the clay with a piece of wire.

The common dating techniques tell us that the larger the hole the older the pipe and vice versa. It is hard to determine dates however with small fragments of pipe bowls and small stem pieces. It is rare to find whole bowls, stems or whole pipes on any site. This makes the dating process much harder.

A chart made up by J.C. Harrington gives us one way to date the pipes by using a simple drill bit set with 1/64th steps from 1/16 to 9/64 of an inch. By taking samples from several different sites Harrington gave us date ranges in 40 year increments with differing stem hole diameters for each 40 year period. Lewis Binford came up with another formula for dating pipes into a smaller range of time that is also very helpful in dating pipe stems as well. Both are useful but I won’t go into more detail about the dating for now but will say that not only can you date the pipe stems and bowls but also that we have quite a few in the lab to date! Here’s a picture of an English tobacco pipe for you to check out! Until next week…
Pete
Posted by Jim at 2:37 PM No comments:

Near Future of Port Tobacco's Distant Past

On the evening of October 11, before the Northern Chesapeake Archaeological Society in Perryville (Cecil County, Maryland), I gave my first formal presentation on the Port Tobacco Archaeological Project; the first of what I expect to be many illustrated talks by the project staff. During the talk I characterized Port Tobacco as the best preserved site of a historic Chesapeake town in Maryland. I've worked on such 'lost towns' for a good many years and I think the characterization accurate and appropriate. The question now, as the initial survey moves forward at a steady pace, is: Where do we go from here? Once we have completed our survey, after we have cataloged all of the artifacts, drawn all the maps, and prepared a detailed report of the findings, what comes next?

Expansive excavations, exposing not only entire buildings, but blocks of the town, is not in the near future. Many questions can be answered with a smaller effort, and troublesome issues such as where to properly store and manage the collection of artifacts remain to be resolved. In the short term, however, there are questions that the project team can and should answer; questions that can be addressed with relatively small test excavations undertaken in areas pinpointed by the survey. Our primary concern at the moment is understanding the complex geology of the site and, particularly, the processes by which not only the river but the town became engulfed with sediments. Precisely when did flooding occur and what did the town look like after destructive storms. Understanding these events is integral to our study of the rise and fall of the town and to the analysis and interpretation of finds in answering many other questions.

Within the next two months, the Archeological Society of Maryland's board of trustees will settle on a site for its annual field session, typically held around Memorial Day Weekend. The field session brings scores of avocational and professional archaeologists to a site for ten to twelve days for controlled archaeological excavations, laboratory work, lectures, and sometimes tours, in an atmosphere of collegiality and friendship. It is nothing short of a helluva good time, regardless of weather. April and I hope to bring the 2008 Tyler Bastian Annual Field Session to Port Tobacco. During this week and a half expedition, we would like to explore the geological and occupational history of Maryland's premier 'lost town,' the best preserved of any Maryland town site worthy of the appellation 'town.'