Not much to report today. Scott and I spent the day at St. Nicholas Cemetery resurrecting twelve more gravestones with the help of volunteers Laurie and Violet. We are rapidly nearing the end of this seven year effort to restore a community cemetery that was demolished in advance of the construction of the Patuxent River Naval Air Station in 1943.

when the effort is finished, Scott or I will blog about it, summarizing what we have accomplished. For the moment, however, we are both exhausted. Sixty percent humidity made it tough.
Posted by Jim at 8:05 PM No comments: 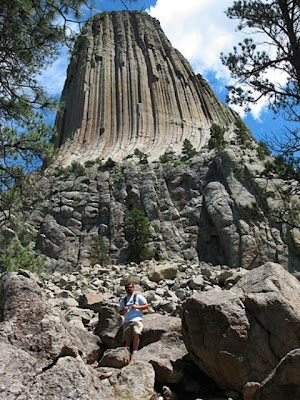 Peter Quantock has worked with me for two years. He has taken a lead role in the Port Tobacco project, supervising, drafting, cataloging, etc. His first GAC projects were shovel testing a field overgrown with poison ivy and briers in 95 degree heat and 80% humidity, and monitoring cable installation for endless weeks at Greenbury Point, just outside of Annapolis, typically in cold, rainy weather. He persevered.

Most of our readers will know Pete from his work at Port Tobacco and as frequent contributor to this blog. He has been responsible for the work at the so-called Native American locus at Port Tobacco.

When Pete manages to escape the tyrannical direction of his supervisor (me), he often turns to the great outdoors. Here are a couple of pictures of Pete in his off hours on land and on sea.

Pete earned his baccalaureate at the University of Maryland, Baltimore County, majoring in Ancient Studies. He has worked in Spain and traveled extensively around the world. He aspires to an advanced degree in anthropology or history. 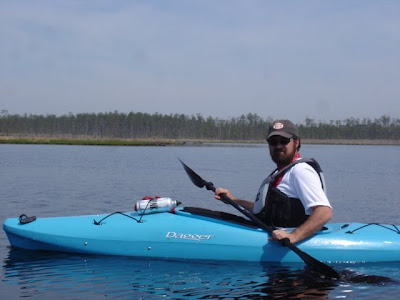 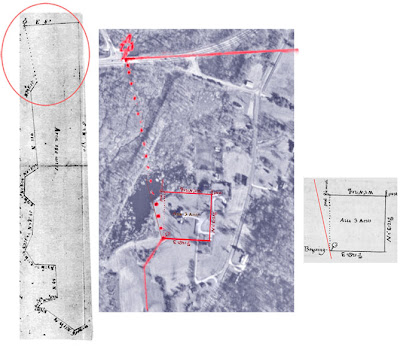 Why are several of the features we found this summer in Port Tobacco at an angle to the Courthouse Lot?

First is the 1727 plat for land within Chandler Town on which the new Charles County courthouse and jail were to be built. The lot is almost a square, and the drawing itself is not that exciting. But the description says “beginning at a bonded Spanish Oak standing in or near the South fifteen degrees East line of the said town”.

Second is the 1722 Patent Certificate of William Chandler for “Addition to Chandler’s Hope”. The description starts “beginning at an ancient bounded White Oake standing near a Great Marsh and Ashen Swamp by the side of the Nanjemoy Road in the line of Chandler Town”. The line of Chandler Town is shown as a dotted line across the marsh to indicate this line was not measured but had been drawn ‘back to the beginning’. This plat covers 180 acres but we are only interested in this northern part.

I always like to try to get some visual perspective. So I have overlaid the plats over the Port Tobacco landscape. This is only approximate, but I find it informative.

In the area southwest of the Courthouse I have found some lots that orient with the S15oE Chandler Town line mentioned in the Courthouse plat and other lots that orient with the N38oW line that is south of the dotted line on the Chandlers Hope Addition plat. The orientations of the lots do not necessarily match exactly. But taking into account all the sources for variations in measurement as well as the different ways to specify which direction is north, they are close. So the posthole lines could be in a lot with one of those orientations, or they could have existed in Chandler Town before Charles Town (commonly known as Port Tobacco) was laid out. The Chandler Town Addition plat indicated that the existing improvements on the land of 180 acres consisted of 1 house, 2 tobacco barns and a lot of fencing

I am looking forward to finding out the orientation of what we found and to see if the information in these two plats can help explain those orientations.

Apologies for no blog yesterday, seems we have had some technical difficulties with the internet.

Seems as if Carol Cowherd has been making some great progress in our deed research and establishing lot lines on the ground in Port Tobacco from old Patent Certificates and land records.

It looks as if we have lots 38 and 45 locked down next to each other. Lot 45 is the Indian King lot that April and her interns spent a month looking at and finding wonderful things.

More on this once we can wrap our heads around it full time. Other projects are in the works.

Washing of artifacts from the summer is complete!!

Stay tuned for an update on the fall digging schedule.

- Peter
Posted by pquantock at 4:30 PM No comments: 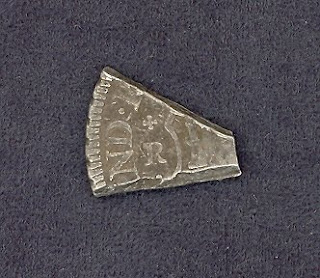 Today while Tom worked hard to wash the remaining Port Tobacco artifacts he came across this fragment of a coin which was found in Stratum 1 of Unit 74 in the Jamieson Field. Having never seen anything quite like it, some sleuthing was in order.

Our preliminary research shows that this is a piece of a Spanish dollar. This silver coin was produced in Spanish America beginning in 1497. It was used around the world, including in the United States, where its use was only discontinued in 1857. The whole coin is worth 8 Reales (the unit of currency used in Spain at the time), and it is possible that this piece actually is a "piece of 8," meaning it is an eighth that was cut from a coin in order to make smaller change. This is the second coin found at Port Tobacco that has been cut in this manner.

It is more difficult to analyze the decorations of this coin considering the small fragment, so it is helpful to take a look at an intact coin:

Spanish Dollar from the reign of Ferdinand VI of Spain dating to 1753.

The "R" visible on our fragment is the mark of the assayer who supervised its minting. However, it is impossible to tell where this coin was minted, as the lower part of the coin bearing this information is missing. The date is also missing, though we know that this particular type of coin was produced from 1732-1772. A rough measurement of our fragment puts it at 19 mm, which is within the range of being half of the diameter of an intact coin (37-41mm).

As for the design on the coin the image on the right shows a small portion of a pillar. These coins were commonly called "pillar coins," as the design represents the Pillars of Hercules. The pillars read "PLUS ULTRA" meaning "further beyond," referencing the expansion of the Spanish Empire. Between the pillars is an image of the Old and New World. The Latin inscription along the edge of the coin reads in full "VTRAQUE VNUM," meaning the union of two worlds. (These are visible on the intact coin). The reverse side of the coin bears the Coat of Arms of Spain and also denotes who the king of Spain was when the coin was minted. For our coin the king at the time could have been King Ferdinand VI as the end of the name, "ND" is visible. This would date our coin somewhere between the years 1746 and 1759 (though it could have passed through Port Tobacco at a much later date).

Pretty amazing that all of that can be discovered using just a small bit of coin.

So what is this piece of coin doing in Port Tobacco? Perhaps it was fulfilling its job as a coin and on its way to purchase goods or services when it slipped out of someone's pocket. Then again, that is only one possibility of many.

Posted by Kelley at 2:07 PM No comments:

I traveled to Port Tobacco this morning to collect the rest of the washed material. Late in the day I learned from Carol that she found what appear to be some excavation notes among the records of the society for the Restoration of Port Tobacco. I thought we had already searched through all of their files, but the society has accumulated a lot of material over the past 60 years...it is possible we missed something. I'll head back down later in the week to check it out.

Tomorrow, Kelley and/or Tom will post something on the latest catalogued material and on Tuesday I'll post some of Carol's interesting archival analysis.