For the next two or three days I'll be posting blogs that focus on PTAP team members and their accomplishments outside of the Port Tobacco project; but, of course, I'll show how at least two of those efforts have implications for our exploration and interpretation of the town.

This Sunday, PTAP member Scott Lawrence celebrates his 46th (?) birthday. I don't know exactly how many years, but it is less than the minimum of 50 years necessary to be considered for listing on the National Register of Historic Places. Below is a picture of Scott. 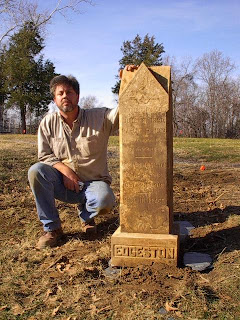 No, Scott isn't shopping for future needs. This is the monument of an African American Civil War veteran that we re-erected at St. Nicholas cemetery at the Patuxent River Naval Air Station in St. Mary's County, Maryland. It may even be the very first buried monument that we excavated and re-erected of what is now well over 100 recovered markers. The cemetery has been nothing but an empty lawn since 1943 when the Navy toppled and buried the markers during war-time construction of the base. Scott's perseverance in securing federal and state permission to restore the cemetery has borne fruit and this all-volunteer effort may well achieve completion by the end of this calendar year.

Friday we recovered 11 more headstones and several footstones. No doubt Scott will spend the better part of this, his birthday weekend, repairing four of the broken stones and cleaning the seven that we re-erected. St. Nicholas is located in the midst of a secure military installation. Most people in St. Mary's County, including those whose ancestors lie beneath these markers, may never have the opportunity to visit the restored cemetery, but at least they can enjoy the satisfaction of knowing that the families who gave up their homes and farms for their country in a time of great need will not be forgotten. And the people of Port Tobacco can gain satisfaction in knowing that the techniques Scott developed and implemented at St. Nicholas will have immeasurable value when one day we begin the search for, and restoration of, the village cemetery that was buried by sediments in the early 20th century.

Happy birthday Scott. I look forward to nominating you to the National Register in a few years.

A slow new day today...Jim and Scott are playing down at St. Nicholas cemetery. I am in the office labelling artifacts. It was not my original plan today but as I was photographing Aboriginal artifacts for Jim's and April's presentations (separate ones in separate states) I noticed that many of them had not been labelled. So today I am labelling some and photographing some, playing with lighting to get better shots along with some writing that needs to be finished.

That's all for today...I'm sure Jim or Scott will update us on what was done at the cemetery sometime this weekend.

February 10: Workshop on Indian Pottery at the Port Tobacco Court House, 7:30PM to 9PM, hosted by the Charles County Archaeological Society. I'll be showing slides and examples, mostly from material recovered from Port Tobacco, and providing tips on how excavators can identify local pottery types.

February 20: Life & Death in 17th-Century Maryland, an illustrated presentation on the archaeology of early Colonial Maryland, held at St. Paul's Wesleyan Church in Oxford, 7PM to 9PM, hosted by the Oxford Museum.

March 4: Spring Workshop in Archeology, a day-long series of presentations and demonstrations on various facets of Maryland archaeology, 100 Community Place, Crownsville, hosted by the Maryland Historical Trust with support from the Archeological Society of Maryland.

April 9: Run of the Mill, an illustrated presentation on millsite archaeology in Maryland, held at the Pascal Senior Center in Glen Burnie, 12:30PM to 1:30PM.
Posted by Jim at 1:13 PM No comments:

Odd Landforms Along the Creek

I was checking out the new version of Google Earth yesterday. This version allows the user to view earlier aerial photographs of any area for which Google has photographs. The September 2005 image (see below) revealed a landform that was not evident in later photographs. 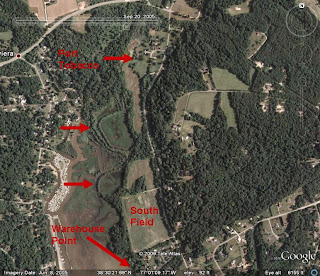 Along the east bank of the creek, just above the South Field and downstream from the village there are large arcs that extend from the shore and into the creek. When I first visited the area with landowner Ed Edelen and team members Pete and Scott, Ed showed us what were clearly artificial ridges. He thought they might be military related, but I didn't think so, and still do not think so; but then I forgot all about them. The Google Earth image jogged my memory and my curiosity.

What are these landforms? Who created them, when, and why? Are they 20th-century efforts at land reclamation? (If they are, they failed.) Or are they coffer dams constructed to hold back the water during sand and gravel mining?

Your thoughts are welcome.

In compliance with the River and Harbor Act of 1894, the US Army Corps of Engineers examined the mouth of Port Tobacco Creek to determine whether it warranted improvement. The report, a digital copy of which Elsie kindly provided, specifies "Chapel Point Harbor, at the junction of the Potomac and Port Tobacco rivers."

Here are some of the more interesting quotations that pertain to sedimentation and the nature of river commerce in the last decade of the 19th century:

"Chapel Point wharf is situated on the east side of the [Port Tobacco] river; Brent's Wharf is on the opposite side, just above Chapel Point. In order to enter Port Tobacco River from the main channel of the Potomac it is necessary to pass over extensive flats that lie on the northeast of the main channel for a distance of about 3 miles before the mouth of Port Tobacco River is reached. Over these flats the Coast Survey soundings of 1862 show depths of 9 to 9.5 feet at low tide, the latter depth still holding at the mouth. In an examination made in 1882 [see yesterday's blog], the depth off Windmill Point is given as 10.6 feet. Above the mouth the depth gradually decreases to 7.5 feet at Chapel Point, where the river is over one-half of a mile wide. Above Chapel Point the depth decreases rapidly, and at Warehouse Point, the former landing for Port Tobacco Court-House, where the Coast Survey chart showed a depth of 3 feet, hardly any depth of water can now be found at low tide. This deterioration is said to be due to the sediment brought into the river from the adjacent lands under cultivation."

"Those interested in the improvement of Chapel Point desire that the depth of water be increased so that the Washington, Norfolk, and Baltimore steamers can make easy landings, and make use of it as a winter harbor when the upper Potomac is closed by ice, freight and passengers to be then forwarded by the proposed railroad. While Chapel Point Harbor, if improved, would make a fair ice harbor, it may be stated that the closing of the Potomac River by ice is so infrequent that an expenditure at this point for this object would not be justified."

The report tells us at least two important things: sedimentation continued throughout the late 19th century and, as also noted in the report of a dozen years earlier, eroding farmland was recognized as the principal culprit. While we have not yet uncovered the relevant documents, I think we can infer that at least some local people were calling for federal action to reopen navigation on Port Tobacco Creek, in the mistaken belief, or excessively optimistic perspective, that steamboats would recapture the region's commercial traffic from the railroads. A quarter-century later, automobiles captured that market, steamboats disappeared, and local railroads increasingly focused on the delivery of coal.

I'll have an interesting aerial photograph of Port Tobacco Creek to show and talk about tomorrow in connection with some field observations the PTAP team made more than a year ago.

Yesterday I noted that in the library of the College of Southern Maryland there is a copy of a report from the US Army Corps of Engineers regarding their assessment of Port Tobacco Creek and whether it warranted dredging. Elsie has found a digital copy of the 1895 report as well. Today I provide an excerpt from the earlier of the two and, perhaps, later in in the week I can post some choice bits from the later one. My additions are bracketed. Parenthetical phrases are in the original.

"[F]rom sixty to eighty years ago, according to the information received from gentlemen residing there [in Port Tobacco], the creek extended up to the town and was navigable by vessels drawing six feet of water. (The early history of the place corroborates the statement.) There are evidences that it extended in early times farther inland.

The banks are high and bold along the creek, and the loose soil, since the country has been settled and under cultivation, is carried down by rains into the creek; the feeble action of the tide is insufficient to carry it on to the deep water of the Potomac; hence a steady filling up of the channel is going on. The land has encroached upon the water of the creek about 1,500 feet since 1862, the date of the latest Coast Survey chart of that vicinity."

The second paragraph is entirely consistent with observations that the PTAP team has made in the blog and in our technical reports. The first paragraph is interesting because it is a bit of oral history dating to 1882. We do not know with whom the surveyors spoke and, therefore, we can't assess the validity of what they told the surveyors. Certainly few residents in 1882 would have had personal recollections of Port Tobacco for the 1820s and probably none had first-hand knowledge of the town and the river in 1800.

Precisely what those other "evidences" are and what the author meant by "The early history of the place" remain uncertain. Perhaps this is more oral history, perhaps pilings and other waterfront structures survived in Port Tobacco long after the loss of navigable water.

We are left with some important questions:
Documents such as this 1882 report are few and provide only scattered glimpses of the changing social and natural environments of the Port Tobacco drainage. Combine findings from those sources with those of archaeology, particularly the recovery of information from tightly dated contexts, and we have the prospect of answering these and other questions more fully than we could with either approach alone. We can then build a reliable, supportable history based on reliable information and not on surmises of what must have happened.

One of the documents that I examined at the College of Southern Maryland last week was a published report of the Chief of the US Army Corps of Engineers dated December 12, 1882. The corps had conducted an initial survey to determine how waterways might be improved in the Potomac River drainage. After visual inspection, examination of the 1862 coastal map, and interviewing local residents, the Corps recommended dredging only near the mouth of Port Tobacco Creek. The reasons were twofold:
I'll provide an extended quotation tomorrow.