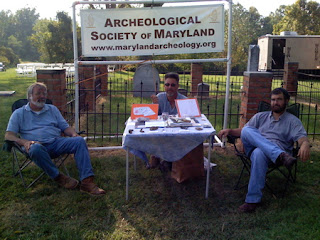 It has been a productive weekend at Port Tobacco. We are nearly finished shovel testing the field to the south of the courthouse. We have encountered several distinct subsurface layers, reflective of the various uses of this area of town through time. The density of artifacts has decreased as we move away from the courthouse and the town's main roads, but every test pit contains a variety of artifacts.

Tonight we are manning an information booth at the Civista wine tasting event held at the Port Tobacco courthouse. This was an excellent opportunity for the main research team (Jim, Peter, Scott, and myself) to talk with the local public about our project. Hopefully we have raised awareness and maybe even recruited some new volunteers.

We want to thank Shelia, the Society for the Restoration of Port Tobacco, and Civista for this opportunity. 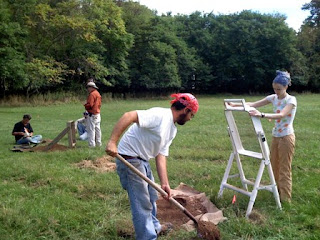 It was another beautiful day for fieldwork out at Port Tobacco. We had two new volunteers, one from the Archeological Society of Maryland and one from University of Maryland, Baltimore County. The site did not disappoint as we encountered archaeological deposits in all the shovel test pits (STPs) dug today. We have an interesting mix of historic ceramics, from tin-glazed earthenwares, to refined redwares, Rhenish stoneware, white salt-glaze, pearlware, creamware, whiteware, etc. (Check back on Monday for a blog entry by Peter on the ceramics of Port Tobacco.) We also uncovered more prehistoric artifacts in the form of a few quartz bifaces.

The main subject of our field hypotheses today was a compact gravel layer encountered in a handful of STPs. We debated the potential for this layer to be natural or cultural and decided it was an old road-bed...for now. It is not easy to interpret such things from the small window that a shovel test pit provides. Without knowing the extent of the layer, its directionality and starting and ending point, looking at a small 16-inch section of it provides limited data.

We will be back out in the same field tomorrow. There may be more opportunities to follow this layer and gain more confidence in the road hypothesis.

What You Can Do To Help

In response to comments on yesterday's posts, there are numerous ways to help support the Port Tobacco Archaeological Project.

1. Join the Archeological Society of Maryland (ASM)
We will be having special events for members including a three-day volunteer weekend in mid-October. This event will provide opportunities to assist us with fieldwork and labwork. There will also be presentations on our research each day during the lunch break.

2. Join the Society for the Restoration of Port Tobacco (SRPT)
This society is active in efforts to preserve and protect the land and buildings that constitute the town. Membership options are as low as $10 for an individual and $15 for a couple.

3. Make a tax-deductible contribution
Both the ASM and SRPT accept tax-deductible donations. Make a note on your contribution that you would like the funds to be used on the Port Tobacco Archaeological Project. Every little bit helps keep the project alive.

4. Volunteer
We accept volunteer assistance with all aspects of the project and can provide training for most jobs. If you are in Maryland you can contact us about working in the field, the lab, or in the local archives. If you are outside of the state you can assist with archival research at your local library or on the internet. If you have marketing, publicity, or fundraising skills we would love to hear from you too.

For further information about how you can help, feel free to drop me a line at abeisaw@yahoo.com. Put Port Tobacco in the subject line to make sure it gets to me.

I have finished this round of library research here at Binghamton. I compiled some more interesting references which I will blog about in the days to come. I've also picked up a copy of Kim Kihl's Port Tobacco: A Transformed Community, which I look forward to reading in the next few days.

We are back out at Port Tobacco for fieldwork starting this Friday. The plan is to do some additional mapping and continue shovel test pitting in the field south of the courthouse. I am going to try to take some video of us so our readers can get a better sense of the site and the techniques used.

If you have any questions or suggestions about our work or the blog please feel free to leave a comment here.

Digging in the Library

Library research often feels like fieldwork. I have a general sense of what I am looking for but never know what I will find. This break in fieldwork has allowed me to return to my home institution, Binghamton University, to partake in some much needed library time.

So far I have found an interesting mix of references on Port Tobacco. The oldest is Isaac Weld's 1807 book detailing his North American travels from 1795 to 1797. Weld provides a general description of the town:

"Port Tobacco contains about eighty houses; most of which are of wood, and very poor. There is a large English episcopalian church on the border of the town, built of stone, which formerly was an ornament to the place, but is now entirely out of repair; the windows are all broken, and the road is carried through the church-yard, over the graves, the paling that surrounded it having been torn down." (137-138)

"On the 21st of the 9th Month, 1804, I left Alexandria, crossed the Potowmack [sic], and went down to Port-Tobacco. In my way I passed through Piscattaway, where I dines, and where, amongst other things, broiled squirrels were served up at table. In travelling along this day, I observed that the population of this part of the country consisted chiefly of black people; and, in many parts of the road, I noticed it was mostly tracked with bare feet, some of which appeared to be immoderately large, arising, probably, from their almost constant practice of going barefoot." (47)

Since Port Tobacco was a backdrop for the events surrounding the Lincoln assassination, there are also several authors that appear to have projected their anger onto the town as a whole. George Alfred Townsend's 1865 book on John Wilkes Booth provides the following description of Port Tobacco:

"If any place in the world is utterly given over to depravity, it is Port Tobacco. From this town, by a sinuous creek, there is flat-boat navigation to the Potomac, and across that river to Mattox Creek. Before the war, Port Tobacco was the seat of a tobacco aristocracy and a haunt of negro trades. It passed very naturally into a rebel post for blockade-runners and a rebel post-office general. Gambling, corner-fighting, and shooting matches were its lyceum education. Violence and ignorance had every suffrage in the town. Its people were smugglers, to all intets, and there was neither Bible nor geography to the whole region adjacent. Assassination was never very unpopular at Port Tobacco, and when its victim was a Northern President, it became quite heroic. A month before the murdr, a provost-marshal was slain in his bed-chamber. For such a town and district, the detective police were the only effective missionaries.The hotel here is called the Brawner House; it has a bar in the northernmost cellar, and its patrons, corousing in that imperfect light, look like denziens of some burglar's crib, talking robbery between their cups; its dining-room is dark and tumble-down, and the cusine bears traces of Kaffir origin; a barbeque is nothing to a dinner there. The court-house of Port Tobacco is the most superfluous house in the place, except the church. It stands in the center of the town, in a square, and the dwellings lie about it closely, as if to throttle justice. Five hundred people exist in Port Tobacco; life there reminds me, in connection with the slimy river and the adjacent swamps, of the great reptile period of the world, where iguanadons, and pterodactyls, and plesiosauri ate each other." (490)

La Fayette Curry Baker's 1867 book on the history of the Secret Service provides some brief accounts that illustrate the political probhttp://www.blogger.com/img/gl.link.giflems Port Tobacco faced during the Civil War.

Letter to Sec of State dated 1861
..."On my arrival at Port Tobacco, the headquarters of Colnel Graham's regiment, I found the inhabitants complaining bitterly at their alleged ill-treatment and depredations committed by the soldiers unger his command." (105) ..."The postmaster at this place is secrelty doing all in his power to further the interests of the ." (106)

I am sure there are many other historic descriptions of Port Tobacco still waiting to be discovered in the library. Off I go. 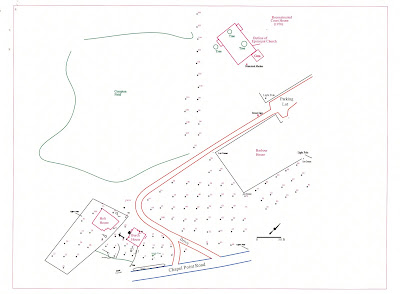 Just about every field day starts and ends with some survey work using the total station. This allows us to generate a relatively accurate map of our excavations and the buildings, fences, roads, trees, and other features and obstacles that exist at the site. The total station provides us with coordinates (north, east, and elevation) which we then use to draw the map using a software package called AutoCAD.

In the lab the site map helps us interpret and display our finds. In the field it helps us decide where to focus our day's efforts. The site map is also important as a record of our work so that future archaeologists, historic preservationists, planners, and site visitors will be able to identify the areas that have been excavated.