Spend your entire adult life looking for and studying other people's trash and from time to time you will find something that defies ready identification. Well, that happened the other day when I picked up this object (pictured below) while we were mapping and collecting the fields south of the colonial town of Port Tobacco. 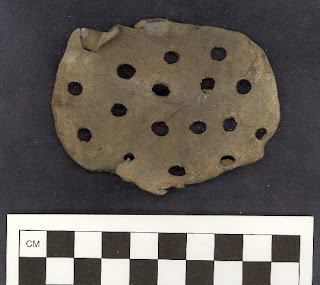 It is soft lead, oval in outline, about 3.2 inches by 2.4 inches and about 0.09 inches thick. The oval, punched holes are under a quarter of an inch along their longest axes. (The scale is metric.)


The object came from the earliest of our sites that I've discussed for the past couple of days, most of its associated historic artifacts probably dating to the late 17th century and first quarter of the 18th.


What gets my goat is I'm pretty sure I've seen one of these things before. Speculations appreciated, positive identifications preferred.

The history boys (Pete, Scott, and me) completed the survey of the fields south of Port Tobacco this afternoon. It was a bit of a trying day, the winds not yet having picked up and the deer flies deciding it was a good day to get out and reproduce. Ah, spring.

We collected nary an historic artifact today...all prehistoric, including projectile points, pottery, and the usual flakes and fire-cracked rock.

I thought I might share a bit about one historic artifact that we collected two days ago on the earliest of our historic sites: a strike-a-light (see below). 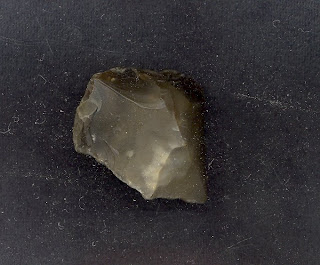 This nugget of English flint (it's barely an inch long) looks a little like a gunflint and, in fact, worked as such; however, instead of being clenched in the hammer of a flintlock rifle it was held firmly between the thumb and forefinger of some anonymous colonist. Struck against a piece of iron it would have sparked, igniting a small wad of tinder, then kindling a fire. Sulphur matches weren't even a glint in an inventor's eye at the time and many folks had a flint and steel kit for the purpose of lighting a kitchen fire. Now all we have to do is find the kitchen, which I think we can. We are, after all, archaeologists: if we can find a 'match,' how hard can it be to find the hearth?

Jim
PS. Voting on the choice of "Movie Night" ends tomorrow. All in favor of Jim's home movies of him as a child, say yea! Maybe we could just watch those and forego the action films. There are about fifteen hours worth, but if we spread them out over five nights there is no reason anyone should miss a single minute.
Posted by Jim at 7:50 PM No comments:

Pete and I are off to our Calvert County project in a few minutes, but I thought I would post a brief note before leaving, elaborating on yesterday's finds at Port Tobacco.

The small site that we finished collecting yesterday produced only about three dozen historic period artifacts. I washed them last night and noticed that of the three pipestems we collected, two had bore diameters of 7/64ths inches and the other 5/64ths inches. The former are typically of the last quarter of the 17th century.

We also recovered, among the sherds of Buckley earthenware and other redwares, one sherd of Staffordshire Combed Slipware and one of Midlands Yellow. Midlands Yellow, and English ceramic type, has been recovered on sites in the region dating to the very end of the 17th century and the very early 18th century.

The artifact sample is too small for building robust hypotheses, but I suspect we have found the earliest site to date at Port Tobacco. It is almost certainly part of the town's precursor, Chandler's Town. This is a site well worth further exploration.

Some days ago I reported that we had found another, smaller 18th-century site in the southernmost field, just north of Warehouse Point. Today Pete and I completed the mapping and collection of that part of the field. The site appears to be small and confined to the top of a small rise. There weren't many historic period artifacts, but they all date to the 18th century and, probably, to the early 18th century: Staffordshire Combed Slipware, Buckley earthenware, tin-glazed earthenware, wine bottle glass, and a few tobacco pipe fragments. No White Salt-Glazed Stoneware or Creamware. I think we have another site that was part of Chandler's Town. It might even be a servant or slave quarter associated with the larger site just 200 ft or so to the east.

Of course, we have found a great deal of prehistoric material as well, including many of the same projectile point styles and a sherd or two of aboriginal pottery.

We expect to return to the field and finish this Friday. We'll then spend the next week or two drafting maps, cataloguing and report writing. We have a couple of other projects that are ahead in the queue, but we should finish them quickly enough.

The Rev. Lemuel Wilmer married Henrietta Brawner, daughter of Henry Brawner. Even as the leader of the Episcopal Church at Port Tobacco, I suspect he was not a very popular person with many residents. He was an ardent Unionist in the time of the Civil War. Throughout the war (1861-1865), he continued to pray for President Abraham Lincoln in worship services, causing Confederate sympathizers to regularly rise to their feet in silent protest.

Wilmer also found himself associated the Lincoln assassination conspiracy. Apparently, as Booth and Herold approached the home of Dr. Mudd, they originally asked for directions to the Rev’s house and supposedly headed in that direction.

He was Rector of the parish from 1822 to 1869; a rather long time. He is best known for his establishment of one of the earliest “free” schools in Maryland. Begun in 1833, he provided land and money to start a free public school "for 100 children living in the vicinity without regard to their sect, sex or circumstance." The altar in the present Christ Episcopal Church in La Plata, is dedicated to Wilmer.

It is interesting to note that Wilmer is also directly descendant from Augustine Herrman, noted 17th century Maryland cartographer.

On another quick note, we all know archaeology is fun, but this weekend Jim and I worked on a Phase I job in Calvert County. It was very hot and in all the test pits we dug, we found no evidence of historic or prehistoric occupation. I guess it's just as important to know where things are not, as it is to know where they are.

SPECIAL NOTE FROM JIM: We soon will post a schedule of lectures and workshops that will occur during the June 13-23 Archeological Society of Maryland field session at Port Tobacco. This schedule will supercede that recently published in ASM Ink, the newsletter of the Society. As I tell my students at the beginning of each semester, life doesn't come with a syllabus...be prepared for last-minute changes.

Also, we will be in the field just north of Warehouse Point on Wednesday and, probably, Friday.
Posted by Scott at 8:27 AM 2 comments:

More on the Susquehanna Canal

We're still in the field in Calvert County through tomorrow (Tuesday), weather permitting. I thought I say a little more about the Susquehanna Canal, and specifically the Octoraro Locks.

The canal was completed in 1803 and fell into disuse around 1830, the new Susquehanna Canal on the Harford County side of the river taking its place. 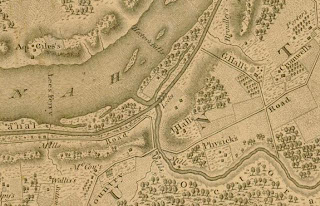 The Harducoeur map of 1799 shows a portion of the canal as planned. The locks on which the Archeological Society of the Northern Chesapeake is currently working appear near the center of the image above, on the right hand side of the confluence of Octoraro Creek and the Susquehanna River. (If you are having trouble visualizing where it is today, the right hand side of the map is roughly north and the locks are just below the Conowingo hydroelectric dam.)

In 1817 Benjamin Henry Latrobe, one of the nation's first premier architects and canal engineers, redrew an earlier map of his showing the canal locks as-built (see below). 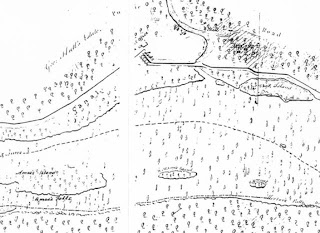 The locks are indicated just above the center of the image. Latrobe accurately depicted the locks as perpendicular to the main axis of the canal. That is to say, whereas Harducoeur expected the canal locks to be in line with the canal, Latrobe understood that they would not. The canal paralleled the river and, just before reaching Octoraro Creek, turned 90 degrees to the river, the engineers taking advantage of the topography to effect the decent in elevation with one set of three locks. The canal, upon descending through the locks, turned 90 degrees again, this time to parallel the river as before, extending downstream to a viaduct that carried the canal over the creek.

The current archaeological effort examines the construction of the locks and investigates buildings associated with the construction, operation, and maintenance of the canal.

Scott and I are off to another project area in Calvert County today and tomorrow, so we won't be doing anything on Port Tobacco. I thought, however, that I would share something of what we have been doing with the Archeological Society of the Northern Chesapeake: an investigation of the Octoraro Canal Locks of the Susquehanna Canal (1803 to ca. 1830).

Ann Persson and I prepared a report on the work which we have just submitted to the Archeological Society of Maryland and the Maryland Historical Trust. The report includes a topographic map of the northern lock and its surroundings, a version of which appears below. 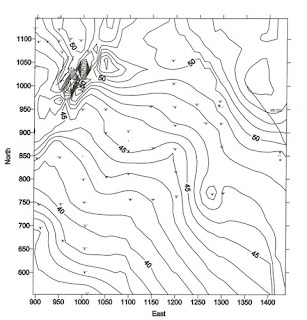 In the course of the shovel test survey we identified a prehistoric site, indicated by shovel tests in red (below); that is, those units that produced prehistoric artifacts of as yet unknown vintage. The canal appears to have cut through the site. 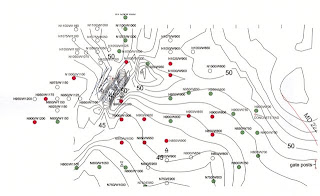 We also excavated two shovel tests in the canal lock to determine whether a floor survives, whether of prepared clay, wood, or gravel. We encountered none. 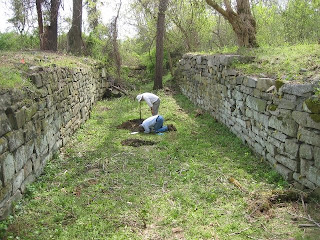