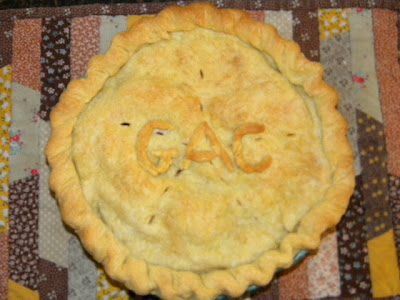 The Gibb Archaeological Consulting (GAC) team parted for a long holiday weekend on Wednesday. We celebrated with lunch and this delectable apple pie baked by Kelley

It has been a great year working with Pete, Anne, Kelley, Scott, and the stalwart Port Tobacco Irregulars (volunteers). Interesting work is all well and good, but the warmth of comradeship, collegiality, and good humor make a wonderful team, and that is what we have: a truly great group of people.

I've already extended best holiday wishes to the GAC team, and now I wish all of our readers a peaceful and enjoyable holiday. We each face individual challenges, and our country has hit a rough spot in the road. I am convinced, however, we can deal with most ills--not all, perhaps--with hard work, mutual respect, and a bit of good will. 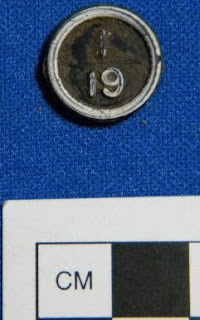 BINGO! This bingo chip was mixed in with the oodles of modern artifacts that were found in Stratum 2 of Unit 83, the unit excavated inside the Swann House foundation. In light of this find, we thought it would be appropriate to delve into the history of the game.

Believe it or not, the Bingo we all know and love was actually originally called Beano, a game that was played in county fairs across the United States. This name was appropriate, as a dealer would pull numbered cards from a box, shout out the letter and number, and the players would mark their cards with beans. There are even earlier versions of this lottery-type game (as far back as 1530!) that were played in Italy, Germany, and France. It was only in 1929 that the game reached the United States, and, as the story goes, the name was changed to Bingo after a New York toy salesman named Edwin Lowe heard someone accidentally shout "bingo" instead of "beano." This fine fellow then went on to create over 6,000 bingo cards (each with a different combination of numbers)...it is said that he then went insane. Honestly, I am not too surprised!

Before long, the game was played in churches as a means of raising money. From there, it quickly branched out to other venues, though from personal experience I know it still is a prominent part of county fair. Presently, an estimated 90 million dollars are spent on Bingo every week in North American alone...now that's a lot of Bingo!

Kelley
Posted by Kelley at 11:40 AM No comments: 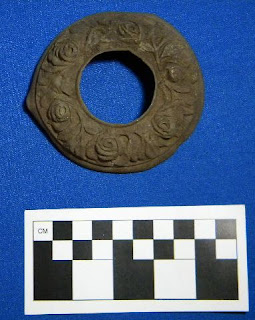 Here is another artifact found during our work at the Swann House foundation. This was found in Stratum 1 of Unit 83, which was excavated in the northeast corner of the foundation. As we have said (or perhaps you have noticed from previous blog posts), at least the first two feet of this unit were filled with rubble and modern trash. Even so, there were a few interesting artifacts in the mix, including this lamp collar. It is made from a copper alloy and is decorated with cast or molded roses and leaves. While we cannot say exactly what part of a lamp it is or when it dates to, a little bit of sleuthing in the 1902 edition of the Sears, Roebuck, and Co. catalog offers us some clues. It could be the decorative piece that attaches a bracket light to a wall, or the piece that covers the end of a glass globe attachment. As always, we welcome your ideas!

Kelley
Posted by Kelley at 10:15 AM No comments:

And the cataloging continues... 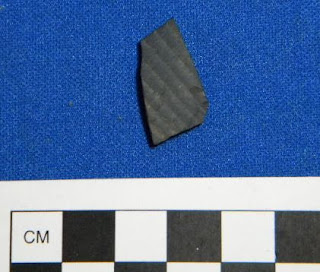 In light of the less than cooperative weather Anne and I have returned indoors to continue cataloging artifacts from the Swann House foundation. To the right you will find a small sherd of black basalt stoneware from the surface collection of the foundation, a type of ceramic I have come across only a few times at Port Tobacco.

Black basalt stoneware is in the family of English dry-bodied stoneware, which also consists of red stonewares and jasperwares. Within these three varieties there are also considerab 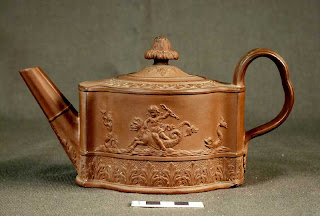 le color variations. These unglazed wares usually come in the form of teapots and the earlier wares are decorated with sprig molding (the attachment of decorative pieces of clay) or molded reliefs. The black basalt variety is fired in a reduced atmosphere (without oxygen), which results in the black coloration, while the red stonewares (see the image at left) are fired in an oxidized atmosphere, resulting in a red color. Red stonewares were made as early as the late 17th century, while black basalt stonewares were produced after 1750. 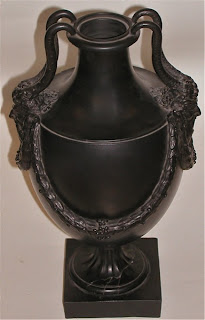 As the popularity of the red dry-bodied stoneware declined, the black basalt remained popular for tea services and vases, especially during times of mourning. Its production continued into the 20th century.

Thanks to Ivor Noel Hume and the Jefferson Patterson Park and Museum for the information.

Kelley
Posted by Kelley at 9:19 AM No comments:

Val Hall has it right! The Mystery Artifact from last week was Westerwald stoneware, a type of Rhenish stoneware. You can read a description of the ceramic on this past Saturday's blog, written by Jim.


This week's Mystery Artifacts is an earthenware with a two-colored paste.
Click the images for a close-up. Enjoy. 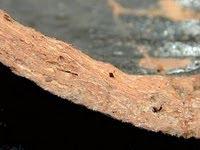 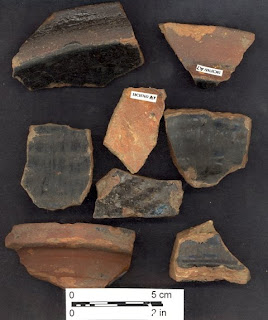