That's right...we have about a half of bag at my office requiring washing and that is it...all of the material recovered this spring has been washed and it looks like the team is nearly finished cataloguing. We shut down the lab operation at Crownsville yesterday and I'll pick up the rest of the artifacts from Port Tobacco tomorrow.

Thank you, volunteers, for having contributed so much of your time to keeping the ball rolling this year. We are ahead of schedule and should be able to thoughtfully plan our October field effort, basing our decisions on analyses of the washed and catalogued artifacts. Special thanks to Elsie, Carol, Maxine, and Sharon...also Bruce Thompson at the Maryland Historical Trust for being a gracious host.

We often talk about the Port Tobacco Archaeological Project team in these blogs, but none of us has ever written about just what that team comprises. Who are the members of the PTAP team?

At the core of the team is the staff of Gibb Archaeological Consulting (GAC, pronounced like the Klingon delicacy of extraterrestrial live coelenterates, or just clear your throat), which is my company. We also have numerous volunteers, many of whom are members of the Charles County Archaeological Society and the Archeological Society of Maryland. We also work closely and productively with several government employees, particularly those working for Charles County.

Starting last week, I've committed myself to introducing the various members each Friday. Last week it was Anne Hayward, one of my staffers, in one of her lighter moments. She'll return to these pages soon with more about herself. This week's PTAPer in the news is Cathy Hardy. 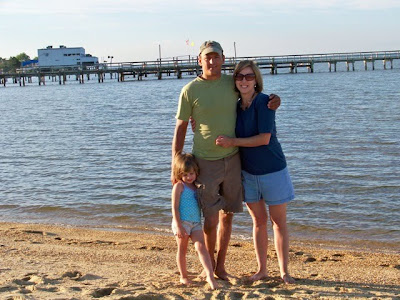 Cathy is the Historic Sites Planner for Charles County. She was instrumental in getting me involved in Port Tobacco and has played a vital role in the development of the project and in building cordial relations with County government and the community, as well as in securing resources for the team. Cathy is also the mastermind behind recent restoration of the Burch House, the PTAP field headquarters.

This is an especially good time to introduce Cathy: next week she will wed Jeff, a local restoration craftsman and a damned good hand with a shovel. Pictured with them is Nina, a prospective PTAP team member.

It is always exciting to find a coin on a dig because they usually have dates on them. Today, Tom and I cataloged a Flying Eagle Cent from 1858. These coins were designed and struck first in 1856 as a new type of cent coin; previous cent coins had a larger diameter. This new size set the standard for penny coins today.

Flying Eagle Cents are 88% copper and 12% nickel, attributed to the fact that the designer was in communication with nickel mine owner Joseph Wharton. The eagle was taken from the Gobrecht Silver Dollar of 1836 to 1839. The wreath on the reverse was from the Gold Dollar and 3 Dollar Coin. All of the Flying Eagle Cents were minted in Philadelphia, Pa, but bear no mint-mark. Collectors like the Flying Eagle series because there are a number of small differences between coins, even within the same year.

The run of the Flying Eagle Cents lasted only until 1858 when it was replaced by the Indian Head Penny. 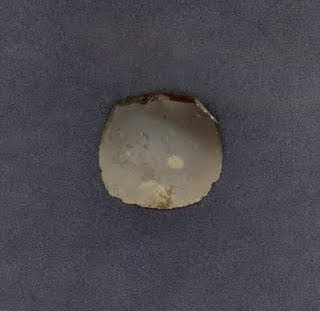 This beautiful gunspall caught our eyes as we were cataloging a few days back. This artifact was discovered in Unit 54, Stratum 1 in the Compton Field. It is a good example of an English Gunspall, which was used to create a spark in a firearm to ignite the gunpowder and fire a bullet.

Gunspalls were made by striking a large nodule of rock. This example is flint, but obsidian and chert also were used. Later gunflints are prism-shaped rather than gunspalls, which are rounded. A large bulb of percussion is visible at the bottom of the gunspall, which resulted from the pressure exerted upon this piece to remove it from a larger rock. Additional knapping was done to finish the bottom edge, and its condition suggests that this flint was not used many times prior to it being lost.

Previous flints found at Port Tobacco include a possible Aboriginal gunflint made of quartz and an English gunflint.

Anne & Kelley
Posted by Kelley at 3:16 PM No comments:

Button, Button, Who Wore This Button?

Here is another small find happened upon by Anne and myself during an epic session of cataloging. This metal button was found in stratum 1b of unit 69. It has a diameter of about 14mm and was cast with the image of the seal of the United States.

This seal is of an eagle with a shield in its center, arrows in one foot, and an olive branch in the other. This eagle can be considered to be a "Peace Eagle" as its head is turned to face the olive branch of peace rather than the arrows of war.

Due to the small diameter of this button it is likely a cuff button, but since there is no letter in the center of the shield (such as an "I" for Infantry or a "C" for Cavalry) we cannot tell the division to which the owner belonged. What we do know is that this button belonged to a fellow enlisted in the Union Army who passed through Port Tobacco, losing his button so we could happen upon it later. (April, perhaps this will help you in your quest to find a Civil War Encampment at Port Tobacco).


Kelley
Posted by Kelley at 2:55 PM No comments: 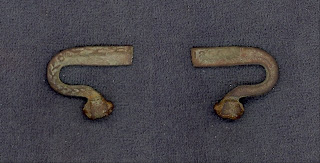 Small drawer pull, approximately half and inch long.
Today, while cataloging artifacts from Unit 72 Stratum 1, in the Jamieson field, Kelley and I came across a delicate piece of copper alloy furniture hardware. It may be a drawer pull from a small object, such as a jewelry box. The hinge connection is handmade. The decorated handle is most likely cast. The front side has a leaf and flower motif, while the back side says '1855'. This could be a manufacturing number, but it is most likely a date.
Just a Reminder:
Tom Forhan will be at the Crownsville Lab washing artifacts tomorrow, volunteers are welcome.
Posted by Anne at 1:55 PM 1 comment:

For over two years, now, our team has used the title "Port Tobacco Archaeological Project," a convenient handle that suggested an effort of limited time and scope. The project is not a legal entity...it is just a sign on a door. Actually, not having a door, it isn't even that.

All of that changed on August 7. On that date, Maryland's State Department of Assessments and Taxation excepted our filing of articles of incorporation. Simply put, we are now The Lost Towns Foundation, Inc. We will retain the name PTAP, but it will be a project of a permanent non-profit foundation. I will begin the lengthy process this week of filing with the Internal Revenue Service for tax exempt status (501[c]3). That will enable the Foundation to accept tax-deductible donations and to apply for grants in its own name.

Other measures that must be undertaken include formation of a board of trustees (they determine policy and raise money) and a technical advisory board (advising on scientific and interpretive issues), and development of bylaws.

A note on the choice of name: it is my intention to develop an organization that can support archaeological and historical research on town formation in the region. This includes aboriginal towns, Colonial period towns, and 19th-century settlements, including hinterland occupations that supported these larger settlements through trade and agricultural production. Although the focus of the Foundation's work over the near future will be the Port Tobacco area, I hope that it will eventually support this kind of publicly involved, high quality research elsewhere in the region.