Hello again!
Keeping with our theme of the Lawrence Collection, this brown stoneware bottle is the next bottle to be displayed here on the blog! 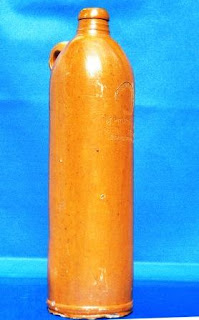 The bottle's dimensions are as follows: height is approx. 1', base is 3.33", inner mouth is .75", and finish (including the neck) is 1.05". The bottle's base has a straight plain twisted wire cut, sort of like the "gray and blue" stoneware jug in the Oct.4th post, but without the curved markings. 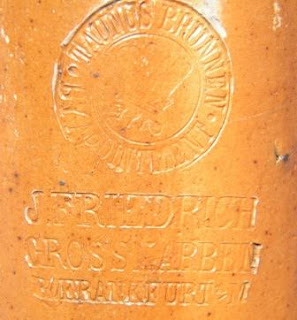 This bottle was fun to research as it was stamped with a maker's mark including the name and the location of where the bottle was manufactured (see left). Around the outer ring of the circular stamp is written "Taunus Brunnen-By Appointment", the inner area of the circle consists of a crest with feathers that are within a crown (the Prince of Wales' crest). Different crests were used by different manufacturers; I was unable to find why this one uses the Prince of Wales' crest.
Stamped beneath the circular stamp is written "J. Friedrich, Grosskarben, B/ Frankfurt A/ M" (Frankfurt am Main). During later research on the web, I found that "Gross-Karben" is a region outside of Frankfurt and near a mountain range called "Taunus"; which is known for its mineral springs. When I translated "Brunnen" into Google translate, it came up with "Fountain".

Further research concluded that the tall, slim, cylindrical shape of this bottle was used to transport mineral water and/or gin. In the case of this particular bottle, it would most likely be used for mineral water, considering the region it was manufactured in. These bottles appear to be popular for exporting from the mid-1800s to early 20th century, which is what I dated this bottle to.

Thanks!
Alyssa
Posted by Anne at 2:35 PM No comments: 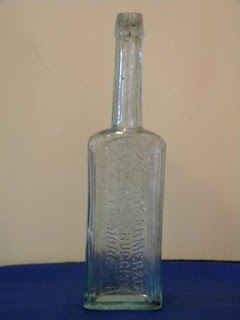 Hello everybody!
Continuing with the theme of the Lawrence Collection bottles...came across this medicinal druggist bottle. The color of the bottle is aqua, and the dimensions are as follows: 9.36" tall, finish height is .80", inner mouth is .53", base is 2.47" x 1.28". Embossed on one side of the bottle is "Boykin Carmer & Co. Wholesale Druggist Baltimore".

Ignoring the fact that the bottle is embossed with a company name and location, I did basic bottle analysis. The bottle was mouth-blown into a mold (post-1865). It has a tooled "oil" finish (1830s -1920s). As most druggist bottles were, it is cup-bottom molded (1870s - early 20th century). The mold had no air vents, as I was unable to decipher any marking in the shoulders, body, base or seams (from/prior to 1885 - 1890). Using these characteristics I deduced that the bottle was dated between 1870s - 1890, due to the cup-bottom mold and the lack of air venting.

However, the embossing on the front of the bottle could lead to a more accurate date. I was unable to find a whole lot about Boykin Carmer & Co.; so, if any of you are interested in this, feel free to research more! 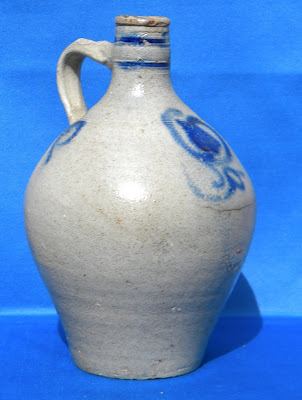 This is an American gray stoneware jug. There are no makers marks, but possible date range can be determined from certain features. The overall shape is ovoid to tall ovoid, which is German in origin. The strap handle is pulled-on, meaning the clay was attached at the neck and then pulled into shape and att 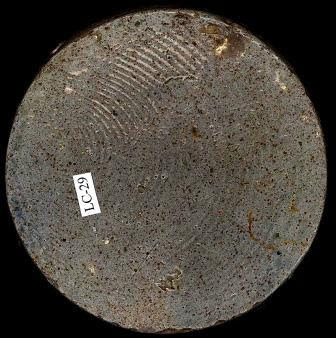 ached to the body. The base of the jug shows how the clay was removed from the wheel with a wire (see left). The glaze is a standard salt-glaze with cobalt painted decoration, but there is no slip or glaze on the interior, which puts the date between the late 1700's to 1860. The lip is a simple rolled rim which is pre-1850. The tooled neck is longer than standard, with incising that mimics a reeded neck. Longer necks date to the 17th and 18th century. So the neck style paired with the lack of interior glaze most likely dates the jug to the late 1700s.

We will be at Port Tobacco on Thursday this week, not Tuesday.
Posted by Anne at 2:27 PM No comments: