This, the last posting for the next several days, is a bit of an omnibus.

First, on behalf of April, Scott, Pete, and myself, we wish all of our readers a wonderful holiday and a healthy and rewarding new year.

Second, for anyone who has had a problem with the main website (http://www.gibbarchaeology.org/), Dionisios (Dio) Kavadias has effected repairs. Dio created the website prior to leaving the company for graduate work at the University of Chicago. He happened to be in town when Scott informed me of some problems with the site. Hopefully it will function satisfactorily.

Third: the draft report for our first phase of work at Port Tobacco is finished. It has to wend its way through some channels, but I expect to send copies to property owners and partners in the next week or so. 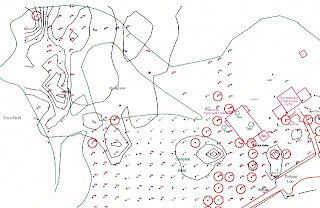 Finally, since we now have some preliminary analysis completed, I offer the following observations on some of our findings. Many of our upcoming postings will draw from the draft report. To start, let's take a second look at the prehistoric finds. Now that we have corrected the catalogue, our analyses will be more accurate. In the image above you see contour lines that represent the simulated distributions of aboriginal stone tools and the waste flakes created as a byproduct of stone tool making. You will recall from a previous posting that we use a computer program to project, or simulate, distributions based on the finds in our shovel tests.


Overall, the distributions haven't changed too much...they are just clearer. There are several clusters of material that indicate the presence of Native American sites. They form an arc that extends eastward from the river, possibly suggesting that the river bank similarly curved to the east during the Woodland periods, 500 to 2000 years ago. Each concentration of material warrants additional study, preferably with series of excavation units, perhaps 5 ft by 5 ft squares. Perhaps over the winter we will conduct a more exhaustive study of the materials we have already collected from the shovel tests in each of these clusters.


So what do Indian sites occupied centuries before European colonization have to do with our study of a Colonial town? Well, first off, Native American cultures are no less important than those of Europeans: they deserve the same attention, and the same respect. Secondly, we are very interested in learning how the landform now occupied by Port Tobacco has been changing, both before and with the onset of European settlement. The distributions of aboriginal materials relative to the river, existing topography, and various types of sediments could prove very useful in reconstructing the recent geology of this portion of the floodplain.

We had a bit of discussion regarding yesterday's post. If you haven't already done so, check out the comments that were posted. Comments are available via the comment link at the bottom of each post. Please, keep the comments coming. My question has not been answered.

Jim and Peter are busy working on the last details of the technical report that describes this year's work at Port Tobacco. They will present us with some of the results of their analyses tomorrow. Then, we shall all take a few days off for the long weekend.

After Friday, December 21st, the next Port Tobacco blog will be Wednesday, December 26th. Hopefully Scott will be back for another profile of a Port Tobaccoan of the past. If not, I will provide a commentary on the research results and future directions of the project.

Safe travels to all this holiday weekend.

So today's post is not a story about what I do know about Port Tobacco but rather a statement of something that I do not understand about Port Tobacco. Maybe one of our staff members or readers (any Historic Preservation people from Charles County reading this today?) can enlighten me on this point.

Recently, I was called out to a home near Binghamton because someone found an archaeological site and some bones while digging under their patio. There, under the patio, was the first floor of a historic structure, complete with a doorway. They had no idea that it existed until then. But, I digress.

With all the Confederate activity that went on in Port Tobacco, I find this to be an unlikely place for escaped slaves to have been ferried through. Can anyone tell me what the story is behind the courthouse listing? 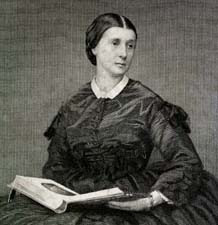 Port Tobacco must have been an interesting place during the Civil War. Conspiracies, spies, combatants, and clandestine operations appear to have been the norm.

Rose O'Neal Greenhow was a seemingly unlikely player. She was born in Port Tobacco in 1813 and was apparently very beautiful as an adult. Her father was a wealthy planter and when he was murdered by a slave in 1817 (see how much fun Port Tobacco was?), her mother raised her amongst the elite of Washington DC. She began spying for the Confederate cause, was arrested, and held in Old Capitol Prison along with her daughter, also named Rose. 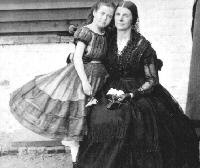 Rose O'Neal Greenhow and daughter Rose at Old Capitol Prison
Eventually she was exiled to Richmond when President Jefferson Davis sent her to Europe to further the Southern cause. While returning home, her ship the Condor, was pursued by a Union vessel during a storm. She exited her ship in a small boat in an attempt to escape. Her boat capsized and she drown, mostly because of the $2000 in gold she carried. Her grave is decorated each year on Confederate Memorial Day. No idea what happened to the gold.
Alright folks. The logo we have is excellent, but it would be nice to have other entries as well. I know everyone is bored during this festive, holiday season, so let's see some more, great Port Tobacco art!
Posted by Scott at 9:19 AM 2 comments:

Last Monday, I posted a request for help in finding a logo for the Port Tobacco Archaeological Project. So far we have two responses. First, Dancing Willow said she would see if her son's graphic arts class would be interested in coming up with some logo suggestions. Second, we had a submission from Sandi G. Here it is: 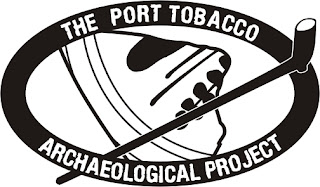 So, take a look at Sandi's submission and see if you have any ideas of your own. As I said last Monday, we will entertain suggestions until Feb 1st.

Thanks to Sandi and Dancing Willow for their participation!