It's the end of my last day with Jim and crew at GAC and I thought I would take this time to reflect on the past three years with GAC and with PTAP.

It was a hot and muggy (typical) August day in 2007 that I started working with Jim. It was a project down in Brandywine with 90% humidity on a 100 degree day. We were surveying a wooded lot with poison ivy everywhere and briars taller than I. It was also my first introduction to Scott. Somehow I managed through the day and despite better judgement (haha) I came back again the next day!

Since that day I have worked on numerous CRM projects with Jim and have been heavily involved with PTAP on many levels. An ongoing shovel test survey, surface collection and two field sessions later, I can say that Port Tobacco has become like a second home to me and the people I have met and worked with there like family.

I was a wide-eye "rookie" when I started but Jim and everyone involved with GAC and PTAP have helped me grow as a professional and as a person.

I hope to continue the great work PTAP has done in graduate school and beyond.

I truly am grateful for my time here. I will miss you all.

So until we meet again in the field, at a conference, in a bar, or elsewhere...it's time to say goodbye!

With great admiration and affection,
Peter
Posted by pquantock at 2:00 PM 2 comments:

Well, the report on the 2009 field session at Port Tobacco with the Archeological Society of Maryland was new last December. Having heard no requests for revision, I decided it was high time to post the report on the web. April kindly accommodated yesterday.

Readers can download a PDF file of the report from the Society of Restore Tobacco website at: http://www.restoreporttobacco.org/page5/files/Field%20Session%202009%20Report.pdf

or just go to www.restoreporttobacco.org, click on Download, and select the December 2009 report, or any of the other four or five reports that we have posted to date.

The PTAP team will be at the Burch House today, dodging rain drops. Do join us.

Yes folks, Laurie and I got married last month and we had a small party at our house in Park Hall last weekend. We even had some of the PTAP crew on hand. 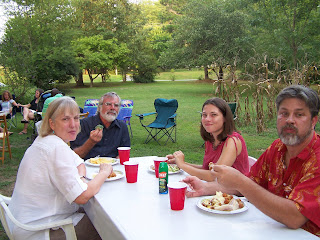 Left to right: The Dynamic Bonnie Persinger, Jim, The Oh-So-Lovely Anne Hayward, and me with a face full of food.

We had a wonderful evening and are glad that some of the PTAP folks could celebrate with us. Laurie and I look forward to seeing many of you again in Port Tobacco! 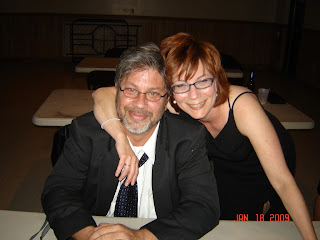 This is Laurie and I from a while back. I couldn't find any pictures from the party with both of us together that would be acceptable on this forum, but as you can see, I am a very lucky man!

PS. The PTAP team will be at the Burch House tomorrow. This will be the last opportunity to see Pete who is off to the University of Denver at the end of the week.
Posted by Scott at 12:42 PM No comments: