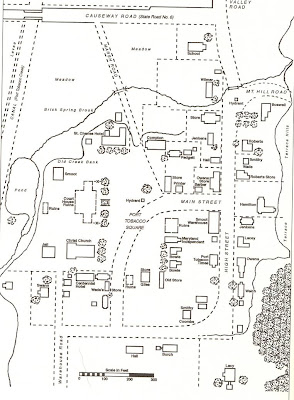 I am confident that I know the approximate location of the Atzerodt Brothers carriage factory. Their 1857 advertisement in The Port Tobacco Times places the shop opposite the dwelling of Dr. Neale, and that is roughly on the east side of Main Street and High Street (see map) and includes the Hamilton lot and a portion of the lot immediately to the north.

This is the lot on which Griffin Carter operated his vehicle shop from at least as early 1842. Blacksmith Charles E. Wade probably succeeded Griffin, after the Atzerodts ceased operations, first working briefly for Carter than acquiring the operation for himself. Given widespread changes in industrial production after the Civil War, and especially in the mass-production of wheeled vehicles, Wade probably did little in the way of manufacturing and increasingly concerned himself with repairs.

If I'm correct, the Carter-Atzerodt shop is on the land of the Wade family, just south of the house in which they now live. There is no evidence pointing to the Atzerodts' shop, or any other shop, behind the Chimney house.
Posted by Jim at 8:35 PM

That is fantastic news Jim!

Great! You did so well with that research I think you should find all the other things we're looking for...the village of Potobac would be nice!

This is all very interesting. Did you ever follow up on Kay Volman's advisory (your 5/17/10 blog) concerning the brick and metal concentration behind Chimney House that may have been an out building foundation?

Sorry about the delayed response. We did investigate behind the Volmans' house. Probably an outbuilding...way too small for a shop of any kind.